The Best Time To Post On Social Media is...? 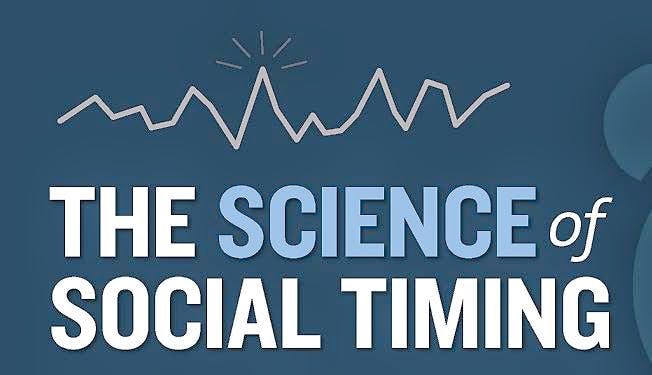 We've all been there before. We are about to post across Social Media (SM) and that foreboding question finally hits us. 'When is the best time and day to post on SM'? I mean, we want as many relevant (maybe even irrelevant) people to see our postings and content, right?

This ever evolving digital social process is called 'The Science of Timing' (SOT).  If we get it right, everyone lives happily ever after.  If we get it wrong, no one gives us a second thought.

The Common Sense Approach is based on an intuitive sense of when people would or would not be on SM. For example, when people are asleep, at work, or at school, they are probably less likely to interact with SM. Whereas, if people are awake and the timing is before, after, or outside of work or school, their likelihood to use SM increases on average.

The Segmentation Approach involves timing based on the SM habits of your targeted audience, which coincidentally, you've collected over time. For example, if you and your organization are targeting teenage gamers during the upcoming summer, you've likely monitored their SM patterns over time, and will run a campaign based on the SM idiosyncrasies they've displayed. In all likelihood, their SM behavior will be different when compared to the entire online population as a whole.  Hence, the Segmentation Approach.

In contrast, The Best Practices Approach is based on how the entire SM audience acts as a whole and provides optimal timings based on aggregate online behavior.  You can think of it in terms of talking at a cocktail party, where there is a lot of chatter at its peak attendance point.

Dan Zarella, SM Scientist for Hubspot, recently addressed the SOT Best Practices Approach for both Twitter and Facebook.  'The optimal time to post on Twitter is late in the weekday, between 2pm ' 5pm EST, as this maximizes ReTweets. Coincidentally, we've found there is no significant difference in clickthrough rates according to the time of day or the day of the week, so it's okay to experiment with your Tweets on the weekends and during late hours.'

Zarella also suggests three key timing points for Facebook: (1) post every other day as  mainstream pages that did this displayed the most likes, (2) post content on the weekends since it elicits the most amount of shares and (3) post content in the morning as shares tend to do marginally better than those published at other times.

Don't "crowd out" your Tweets per hour

But if everyone uses The Best Practices Approach, wouldn't the SM landscape become overcrowded during those specific times and diminish the likelihood of anyone hearing your message?

The three previous methods require someone from within to personally determine optimal timing.  Whereas with The Autoscheduling Approach, 3rd parties determine optimal posting times.  But what are these 3rd parties' optimization practices you say?  And how do they measure up to yours?

After investigating Autoscheduling practices, two unique terms surfaced: static vs. dynamic. A static Autoscheduling system optimizes timing based on The Best Practices Approach, not on individual behavior. While a dynamic system optimizes timing through individual / follower behavior, and gets better over time. So which method would you prefer? Find out which method your provider utilizes.

Last but not least, there is The Contracompetitive Timing Approach. This approach is actually the opposite of The Best Practices Approach and circumvents its downside.  This territory lies at the beginning and tail-end of the cocktail party, where crowds are smaller in number, thereby improving the odds of individual engagement.  By utilizing Contracompetitive Timing, smaller crowds are more likely to hear your voice that would otherwise be lost in the chatter of a full-swing cocktail party.

So which SOT approach is the best? The Common Sense Approach of when people are online? The Segmentation Approach that profiles your specific target audience?  The mega-blast to a crowded room, Best Practice Approach?  Perhaps the best is The Autoscheduling Approach which leaves it in the hands of the experts? Or maybe the Contracompetitive Timing Approach seems like a valid alternative, so your messages aren't lost in the masses? Perchance it is a combination of all the above?

In your personal experience, the best SOT approach is _________. (Please comment below)

Chris Ruby is an award-winning Marketing Research & Consumer Insights Executive with Fortune 500 consulting experience. His niche is the ability to turn complex data into compelling stories that induce a call for action among key decision-makers. His work has been featured by MRA, MRIA, IIR, Norstat Times, Chadwick Martin Bailey & the Optimization Group. Keep up with Chris Ruby by following him on Twitter @ChrisRubyMRX or by reading the Chris Ruby Market Research Blog.