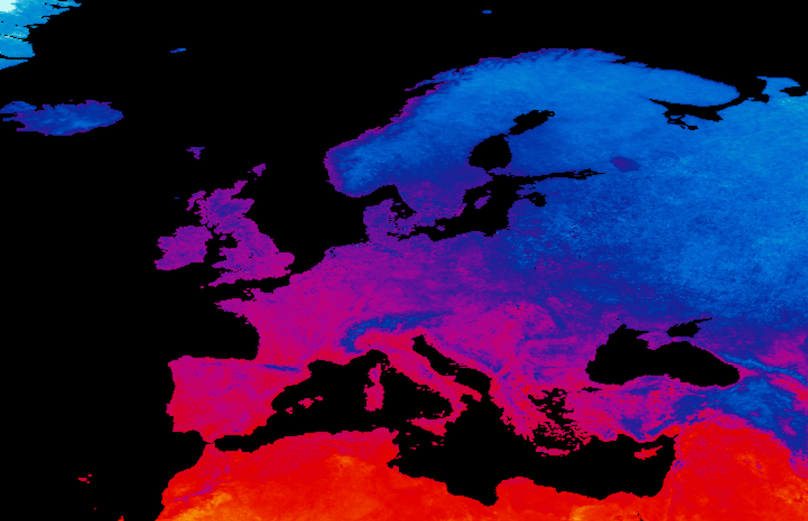 European gas storage inventories finished the winter season at five-year lows, over 8 billion cubic meters, or 50%, below last year's level due to rapid gas withdrawals at the end of the season. This creates a big storage refill requirement over summer 2018, which will keep gas market fundamentals tight, according to Bloomberg New Energy Finance forecasts. In this article, BNEF examines the causes of this low storage situation and discusses what to expect over the summer for this key fundamental variable in the European gas market. 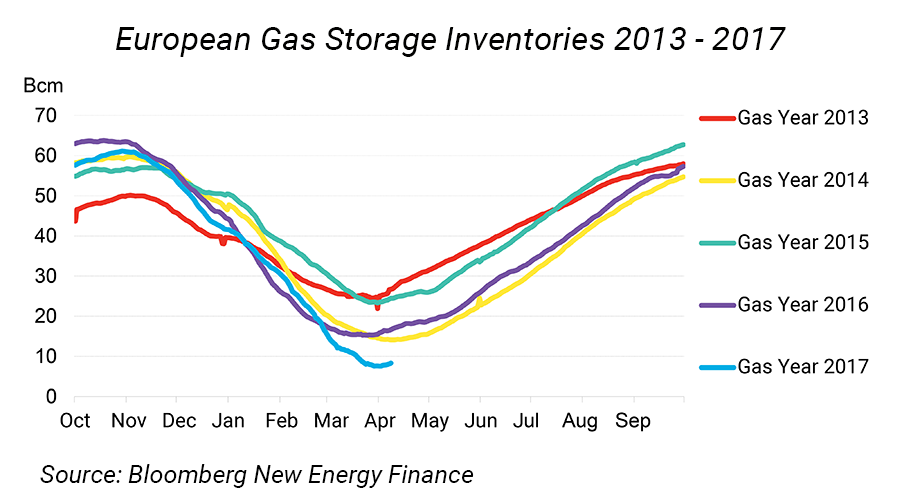 It was not even that cold.

While unusual weather patterns and winds from Siberia brought several cold snaps at the end of winter 2017-18, the winter as a whole was not extremely cold. A weighted average of total heating degree-days across several major European population centers ranks last winter as only the 11th coldest in the last 30 years. This suggests that the gas system could face even tighter situations. This winter the system struggled during tight periods. On February 28, demand hit a five-year high in most of the markets in North-West and Southern Europe, pushing the price of natural gas for immediate delivery to a record of 97.60 euros/MWh in the U.K., 85.50 euros per unit in France, 81 euros in Netherlands and 64 euros in Germany.

The so-called “Beast from the East”, a blast of cold weather from Siberia, tested the resilience of the European gas market. It highlighted the consequences of falling European gas production as well as the fragility of key gas supply infrastructure. The last time the U.K. experienced equivalent levels of demand there were other supply options available. The U.K.’s Rough storage site, which is now being used as a production source by Centrica, was still operational and production at the giant Groningen field in the Netherlands was unconstrained.

In addition to these structural changes, existing infrastructure faltered when stressed during extreme weather conditions. Kollnes, the main processing facility for Norwegian gas, experienced an outage that reduced imports of Norwegian gas to the U.K. Meanwhile, imports to the U.K. via the BBL pipeline, the natural gas interconnector between Netherlands and the U.K., fell to zero due to technical problems caused by a snowstorm.

Coal generation, wind and gas imports from the continent proved key in balancing the gas market in its moment of need. In the U.K., coal generation exceeded gas generation for the first time since October 2015. However, further coal plant closures could limit this option going forward. Wind, as an intermittent generation source, helped to curtail demands on gas-fired generation over the high demand period but by its nature it cannot be relied on in all scenarios. While LNG sendouts provided a source of high volume of very flexible supply on the European continent, sending out volumes to the grid brings the possibility of having to replenish LNG tanks with a potentially expensive LNG cargo at a later date.

BNEF expects lower year-on-year gas demand this summer to help somewhat in replenishing the storages. Assuming temperatures are in line with 30-year averages, gas demand in the residential sector should be lower this summer across Europe, compared to the cold start of the summer last year, which kept space heating demand elevated.

Demand for gas in the power sector should be also lower this summer compared to the same period a year ago because of looser power system fundamentals. Hydro inventories are looking healthier across Europe, which should reduce the requirement for thermal generation. This is reflected in prices. Peak spark spreads are trading below levels of the last two years across Europe incentivizing lower running hours from gas-fired power stations.

However, a carbon bogeyman stalks the market. The price of carbon rose above 10 euros per metric ton for the first time since 2012. High carbon prices act to incentivize gas generation over coal generation, increasing gas demand in the power system. While the carbon market remains oversupplied in 2018, the Market Stability Reserve mechanism will start withdrawing excess carbon allowances by millions of tons from early 2019. Consequently, BNEF expects higher carbon prices, which will act to tighten the gas system in the medium term.

Assuming lower demand and last year’s supply levels, BNEF estimates that storage would fill to approximately 55 bcm by the end of summer, about 5 bcm below last winter's peak level. This low level of storage inventories entering the winter will increase risks during the winter period in the gas market.

Uncertainties surround several supply sources this summer - some aiding storage refill, some hindering it. BNEF will examine some of the key factors below.

Do not count on LNG

Location spreads between Asian LNG prices and European prices suggest that Europe will not be the most attractive destination for U.S. Gulf Coast LNG over the summer. While North Asian JKM prices are lower during the summer, it is still a more lucrative export destination for these U.S. volumes. The same goes for those destinations that are willing to pay a price linked to Brent.

Uncertainties around the future of European domestic gas production are also a potential bullish risk for the European gas market this summer. Following a 3.4 magnitude earthquake on January 8 in the Netherlands, the Dutch State Supervision of Mines (SodM) recommended production from the Groningen field be reduced to 12 bcm a year to reduce further earthquake risks. On  March 29, the Dutch Council of Ministers approved a long-term production plan for Groningen that targets a production decrease to 12 bcm by no later than October 2022, and a gradual phase-out to zero production by no later than 2031.

What happens to production in the more immediate term for summer 2018 and gas year 2018-19 is still uncertain. Further deliberations regarding the 2018/2019 production permit should come in May or June this year. While BNEF does not expect Groningen production to be below 19.6 bcm this gas year, a more aggressive approach to lowering production this summer is a risk that could further tighten the gas system.

The unexpected restart of Gazprom’s supplies to Ukraine is the biggest bearish risk to BNEF's supply assumptions. This would substantially loosen the European gas system. The volume at stake over the summer is significant in the context of the big storage refill task ahead. Despite the rulings of the Arbitration Institute in Stockholm late last year, Gazprom and Naftogaz have continued their dispute regarding the gas supplies to Ukraine. As Gazprom refuses to supply Ukraine with the 4 bcm of gas this year that the arbiter ordered, Ukraine is currently sourcing its gas from Slovakia, Poland and Hungary.

The European suppliers are most likely, in part, to fulfil Ukraine's import needs with gas originally imported from Russia. BNEF assumes this gas would have been economically viable for European customers to import regardless of whether they subsequently re-exported it to Ukraine or transported it further westwards in Europe. The effect of Ukraine's European imports is thus assumed to be a curtailing of overall net imports of Russian gas to Europe. Any resumption of direct imports from Russian gas to Ukraine would free up Russian volumes for the European market and for injection into European storage.

Winter déjà vu all over again?

Should BNEF's pessimistic expectations for storage inventories at the end of summer materialize, the gas system will enter winter 2018-19 on a vulnerable footing. Low inventories at the start of winter 2018-19 will put the gas system on a risky trajectory towards another low end-of-season inventory situation by March 2019. Price spreads between winter 2018 and summer 2019 already suggest an additional risk premium in winter gas prices. Recalling that winter 2018-19 was not very cold, BNEF is concerned how the system would cope with a cold winter in such a situation.

If you enjoyed reading this article, you'll find plenty to interest you at Flame - Europe's leading midstream gas and LNG event.