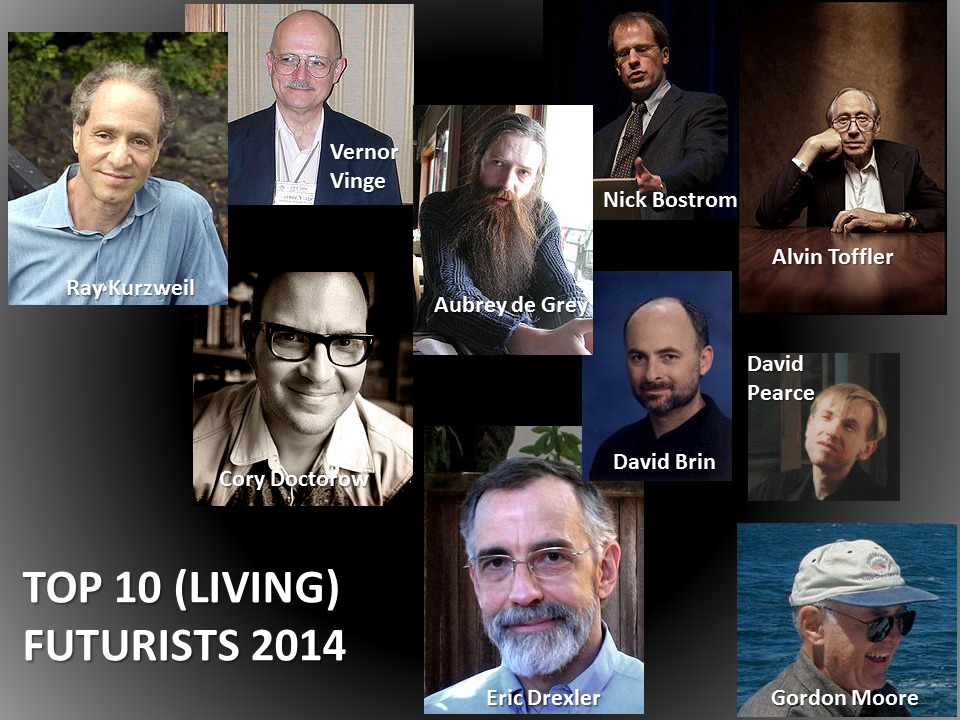 Over at the Institute for Ethics and Emerging Technologies, Ted Kupper and Jon Perry recently hosted a Review the Future podcast that examined their nominations for the top (living) futurists today. Their conversation is definitely worth a listen and offered a lot of ideas to explore about leadership in foresight, prediction, trends, innovation and the rapid face of change we are facing today.

I would like to share the top 10 living Futurists they selected here and invite you to nominate others who you think deserve a place on the list, please share your thoughts in the comments below: Raymond "Ray" Kurzweil is an American author, computer scientist, inventor, futurist, and is a director of engineering at Google.

Known for Book: The Singularity Is Near

Known for The Coming Technological Singularity

Aubrey David Nicholas Jasper de Grey is an English author and theoretician in the field of gerontology and the Chief Science Officer of the SENS Research Foundation.

Nick Bostrom is a Swedish philosopher at St. Cross College, University of Oxford known for his work on existential risk and the anthropic principle. He holds a PhD from the London School of Economics.

Alvin Toffler is an American writer and futurist, known for his works discussing the digital revolution, communication revolution and technological singularity.

Cory Efram Doctorow is a Canadian-British blogger, journalist, and science fiction author who serves as co-editor of the blog Boing Boing.

Kim Eric Drexler is an American engineer best known for popularizing the potential of molecular nanotechnology, from the 1970s and 1980s.

Known as the founding father of Nanotechnology

Glen David Brin is an American scientist and award-winning author of science fiction.
Known for Book: The Transparent Society: Will Technology Force Us to Choose Between Privacy and Freedom?

Known for Book: The Hedonistic Imperative

Gordon Earle Moore is an American businessman and co-founder and Chairman Emeritus of Intel Corporation and the author of Moore's Law.

Formerly a senior copy editor at Thomson Reuters, a research editor at AOL,  and a senior web publicist at Hachette Book Group, Valerie M. Russo is editor at large of The Front End of Innovation Blog, The Market Research Event Blog, The World Future Trends Tumblr, the Digital Impact Blog, and also blogs at Literanista.net. She is the innovation lead and senior social media strategist for the Marketing and Business Strategy Division of the Institute for International Research, an Informa LLC., and her poetry was published in Regrets Only on sale at the MOMA Gift Shop. Her background is in Anthropology and English Literature. You can reach her at vrusso@iirusa.com or @Literanista.