For more than 30 years, Vince Voron has been driving strategic design at some of the world's biggest brands including Apple, Coca-Cola, and Dolby. You've likely seen his work before, though you didn't know it to be his. Voron developed the form and user interface design for Coca-Cola's Freestyle' soda fountain and also the company's 3D and 4D visual identity systems. At Apple, he led teams responsible for the iMac', PowerBook', iPod', and iPhone'.

At the Foresight & Trends conference, Voron took the stage to talk about storytelling and design, and how companies can use both to improve their bottom line. The key to a great story, Voron says, is an iconic brand, a great product, and a compelling experience.

Apple has made big changes since 1978, both to their brand mark and advertising. In the early days, Apple talked about product. But in 2004, they turned advertising on its head with their silhouette iPod campaign. The story shifted from product to experience. Today, Apple's campaigns are very much focused on photography and emotional moments.

In 2006, Coca-Cola's brand was unfocused and losing equity. So they updated their look and feel, putting a modern spin on historic elements and emphasizing the red and white. The iconic polar bear forges a warm connection with the brand through story ' even if you don't use their product.

Dolby too has evolved from product-focused marketing to emotional storytelling. As Voron says, 'Good brands bring out emotion first, then the brand story.' 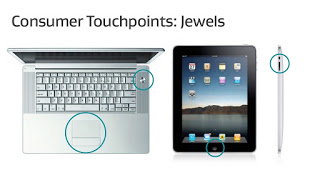 It's hard to design a great product without a consistent design language. At Apple and Coca-Cola, Voron developed identity systems to harmonize designs. Special attention was paid to 'jewels', touch points such as the laptop power button or the Freestyle' touch screen.

To sell designs internally, Voron pushed teams to bring people along on their agenda and invite them to help design a solution. He worked to merge the finance and design areas at Apple. At Coca-Cola, designers would place prototypes in conference rooms to spark conversations with executives. While working on the Freestyle', Voron traveled to visit with company execs. 'Tell me a story about a Coca-Cola machine that you interacted with...which one had the best memories'? In this way, executives helped design the product while appreciating subtle design elements.

From in-store experiences to websites and more, there are a number of ways to create compelling experiences. Dolby is using experiential marketing. Their short animated film Silent won a One Show Silver Pencil. It illustrates the evolution of film technology from the silent film era to the present day, and celebrates the magic of cinema.

By fusing together iconic brands, great products, and compelling experiences, companies can tell a great story and command a premium for goods and services.