What Happens to Ideas? 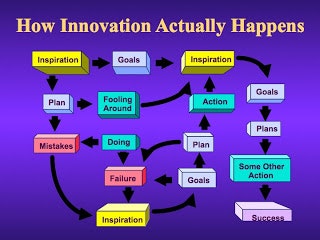 If you have a great idea, what can you do with it?
Welcome to the Information Age, where much of our value and capital hinges upon not just the knowledge we bring and apply, but the ideas that we generate.  We come up with ideas all the time, probably on a daily basis[1], but how often do we get to use them?  When ideas relate to our personal lives, and our personal tastes, we can implement them based on their practical feasibility.  But, how about when our ideas would need to be implemented by someone else, like our employers, companies we like (or used to like), or institutions we support?
Many of us wish we could send our idea to someone, have that person cause it to be implemented, and reward us for giving them something useful.  This is a complete violation of the adage ideas won't work unless you do, which makes such wishful thinking easy to dismiss.  On the other hand, people who want to share their ideas without doing anything more are exactly what companies hope for when they ask for suggestions from their customers (Starbucks implements this particularly well!)[2].  And, when companies are truly open to suggestions from their customers, they are in a far better position to innovate in ways that will delight their customers!
Of course, not every institution is actively soliciting ideas, and that leaves plenty of people with good ideas without an outlet.  Despite the argument that people should implement their ideas themselves, many people lack the know-how, time, and capital, to do so, and may not know how to get those three resources if they wanted to make something happen.  But, if they were to give the idea to the right people, it could be turned into something useful, and perhaps even profitable.  To give a personal example, I once had a suggestion for a commuter rail system about how they could increase both convenience of ticket purchasing and revenue, and mentioned it to a conductor.  He had no clue what to do with the idea, and suggested that it would be ignored if I tried to submit it.
Now, maybe my idea would not have been so profitable for the company, but since my suggestion matched the strategy of nearly every commuter rail system in the Northeast (which I mentioned!), I think it reasonable to suppose that the company in question is leaving money on the table.  You could argue that any commuter rail service working in a major city must be aware of what similar companies do, and thus already considered the idea.

Another argument would be that, because I was a graduate student working on things that had nothing to do with transit operations, I lacked a sufficient level of field-specific knowledge to make a good recommendation.  A third contention would be that this train system probably faces a significant amount of feedback and is too overloaded even to hear a good idea.  All three of these scenarios are possible, as is the case that my suggestion could have led to millions in revenue.

The example highlights three reasons why ideas get ignored:
1) Institutions have the potential to come up with the idea themselves (as Apple curtly points out).
2) People lack the requisite field-specific knowledge to provide creative ideas[3], or, at least, relevant knowledge is considered a necessary criterion.
3) There are far more ideas being submitted than can be handled.[4]
All three of these reasons are directly translatable to impediments that block a company's innovative processes.  For the first reason, substitute "Management" or "The C-Suite" for "institutions."  In some companies, the leadership has no interest in ideas that it did not generate (and this is for a variety of reasons, though I have yet to hear a good one!).

While research shows that being creative requires field-specific knowledge[3], idea generation can actually benefit from having an outside perspective.  A fresh viewpoint, such as that of a novice or outsider, can help avoid entrenched thinking (an analog of functional fixedness), and also apply a different perspective to a problem.  Customers, for example, may not understand a company's operations, or how to make products, but they do understand how products are used, how they could be better, and how the company that makes them can further meet/exceed customers' needs/expectations.

If a company is going to be willing to listen to its customers (as well it should!), it also ought to listen to its employees[5].  As noted, these are the people on the ground who know what is going on, and they may actually have field-relevant knowledge (which the leadership may lack).  Thus, giving employees opportunities to voice and implement their ideas could be highly advantageous and profitable (just ask Valve, which gives its employees all the resources they need to implement new ideas[6]).

With so many people having ideas, it is decidedly impossible to address and implement them all, but that should not stop a company from trying to find and use as many good/useful/profitable ideas as possible.  Some companies have "write to the top" policies that let employees get their ideas up to the leadership, and others use retreats, round tables, and Fed-Ex Days, to get ideas moving.  Yet, one of the simplest solutions, which I have seen in shockingly few places, is simply to have an idea board (serious kudos to the University of Texas at Austin for theirs).  Of course, in all cases, the company needs to have a culture that encourages people to be proactive and entrepreneurial -- this means knowing that the leadership will listen, and that everyone has the potential to make a difference.
None of this, however, is a solution for everyday people with interesting ideas, though IdeaExplore is certainly trying to implement one, and there are sites with suggestions for how to submit unsolicited ideas to companies (example).  That said, ideas have been, and will continue to be, a strong component of intellectual and personal capital.  Keep thinking![7]

1. This is what Kaufman and Beghetto call either "mini-c" creativity or "little-c" creativity [see their paper on the subject; overview here].
2. Some companies even reward people for really good ideas (like the Netflix Challenge, though the solution was not implementable [article]).  Still other companies (like Innocentive) allow firms to issue challenges and crowdsource for answers.  Also, here's why it's important to learn from customers.
3. See Teresa Amabile's Componential Theory of Creativity
4. To this I will add a fourth reason: People do not know how to express their ideas.  This turns out to be one of the most difficult obstacles to surmount, and there are many companies, coaches, and business thinkers who help people describe their ideas with greater clarity.
5. Remember Herb Kelleher's advice: 'You have to treat your employees like customers.'
6. This is most visible in Valve's handbook.
7. The author thanks Joel Chudow for his contributions to this article

Orin C. Davis is the first person to earn a doctorate in positive psychology. His research focuses on flow, creativity, hypnosis, and mentoring, and it spans both the workplace and daily life. He is the principal investigator of the Quality of Life Laboratory and a freelance consultant who helps companies maximize their human capital and become better places to work.