Why Some Ideas Will Never Fly 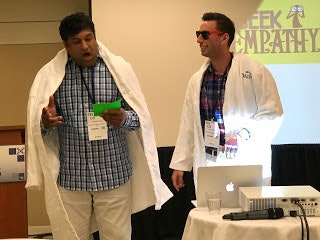 'After watching science do its thing for a while, you realize that knowledge is really a moving target. What we know today will probably be wrong tomorrow. And science is that tool for discovery. When science tells us something, chances are that it will tell us something different a few years from now.'

- from the introduction of the book Present at the Future by Ira Flatow, host of National Public Radio's Science Friday

For someone that's had the opportunity to gaze at the heavens through the same telescope at Lowell Observatory in Flagstaff, AZ used by Clyde Tombaugh to discover Pluto back in 1930, it was difficult for me to accept the official demotion of Pluto from planet to dwarf planet in August of 2004. I had been taught that there are nine planets in our solar system. The reduction to eight was like an oversized, tough piece of steak that I had to chew, and chew, and chew until it was alright to swallow. Just last year my daughter's elementary school class play about our solar system included the 'planet' Pluto. Apparently my daughter's teacher was having a tough time with the adjustment as well.

Innovation, like science in many respects, is often based on the accumulation of knowledge and the interconnectedness of thought. But what happens to our innovation efforts when these thoughts require alteration? What happens when we're required to unlearn something?

When asked in recent years by my relatively young children how planes fly, I've typically spouted off about the Bernoulli Principle ' the 1733 discovery by Swiss mathematician Daniel Bernoulli that the faster a fluid flows, the lower its pressure. Applied to planes, the idea is that a classically shaped wing forces air to fly faster over the top of the wing than the bottom. The faster-flowing air on top means less pressure on top. And subsequently there's more pressure on the bottom of the wing which results in lift. My kids always wonder how or why I know such things.

What my kids haven't realized, and something which I've only recently come to fully appreciate myself, is that the Bernoulli Principle is a myth. The idea that the faster a fluid flows, the lower its pressure, is not actually a myth. The idea however that the Bernoulli Principle is the reason why planes don't simply drop out of the sky, is a myth. A somewhat understandable myth, likely concocted in a post-WWII milieu by educators of all sorts looking for a user-friendly, easy to grasp, catch-all explanation on why planes fly. But it's still a myth, one that has persisted for a long time.

Planes don't stay in the air because of the Bernoulli Principle. It's actually all about Newton's third law of motion (every action has an equal and opposite reaction) coupled with something known as the Coand' effect ' the idea that any stream of gas tends to follow the curvature of a smooth surface (such as an airplane wing) as long as the surface doesn't make a sharp turn. Air goes down. Wing goes up. Seems simple enough. But sometimes it's easier to say 'Bernoulli Principle' than explain Newton's third law of motion, which invariably leads to questions about Newton's first and second laws of motion. Never mind the Coand' effect. Most of our family's local car rides, during which planes are most often sighted and such seemingly benign inquiries surface, are not overly conducive to drawn-out conversations about scientific principles. I'm committed however to dispelling this myth for my children. Or at the very least, should the Bernoulli Principle not yet have fully taken hold in their brains, I'll teach them properly so they won't be forced to unlearn this piece of information in the future. I believe they'll be better off because of it.

As innovators, sometimes we get stuck in certain thought patterns and beliefs. Sometimes we simply need to unlearn certain things. Sometimes we simply need to reorient ourselves in order to remain effective and move forward. British historian and philosopher of history Herbert Butterfield, in his 1949 book The Origins of Modern Science, 1300-1800 described this ability as 'picking up the other end of the stick,' a process that involves 'handling the same bundle of data as before, but placing them in a new system of relations with one another by giving them a different framework.'

Whether you call it 'picking up the other end of the stick', unlearning, reorientation, or whatever, it's a useful and necessary skill needed for innovation. Without it, some of your potentially innovative ideas may never fly.