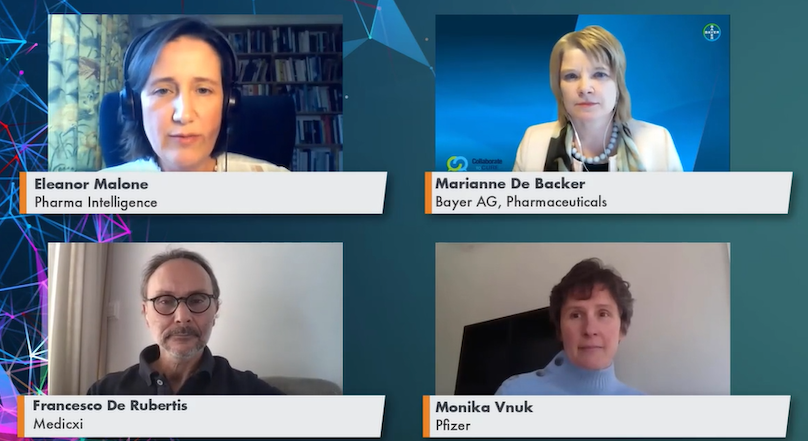 2020 was already looking to be an unprecedented year for investment into biotech innovation before the pandemic hit, and figures from Pharma Intelligence showed that this growth continued to increase rather than wane, with 86 companies making US IPOs, raising $17billion, three times the amount secured by just 50 companies in 2019. VCs raised $30bn in the US alone.

But what really moved the needle was how the pandemic put a spotlight on life sciences, illuminating the sector much more in the public eye. Everyone was rooting for the vaccine companies in the battle against coronavirus, in ways that have just never happened before. As Francesco said, the virus has put on TV every day the amazing power of science and its personal relevance to everyone, making heroes of scientists, legitimizing life sciences as an industry, and powerfully motivating entrepreneurs.

Pharma Intelligence figures show that 30% of all clinical trials that started in 2020 were on Covid, which is stunning for a disease that no one had even heard of in 2019, and for which there were zero trials in 2019. This was the mobilization of resources at warp speed, fuelled by the ‘power of humanity’ as Marianne put it, and channeling the ‘superpower of focus’ as Francesco said.

With such an unprecedented threat to global health laying bare some unpleasant truths about the world’s lack of pandemic preparedness, it also exposed some silver linings about the importance of innovation, expertise and collaboration. Monika spoke to how these topics were fundamental to Pfizer’s collaboration with BioNTech, which had been helped by an established collaboration on a ‘flu vaccine.

Most pharma companies are not active in vaccine development. But, as Marianne highlighted, they all have core skills that whilst not vaccine specific are crucial to running clinical trials and manufacturing and securing regulatory approval of products. Which is why Bayer stepped into the thick of it to support the production and distribution of vaccine, as did other global pharma, who all added their considerable muscle to humanity’s fight against the coronavirus.

Whilst many things have not been done differently, although the sharing of data was exemplary, and covid did not necessarily create new skills, what was different, and unlikely to be replicable, was doing so many things in parallel, committing to biomanufacturing at risk, and in some places, having military support for the logistics of getting the product to people. Such things cannot be sustained. In an acute crisis, when the stakes couldn’t be higher, stakeholders simply had to come together. As Francisco observed, such clarity has never been there before: pharma companies typically balance resources and investment across their multiple therapeutic areas.

But, as Monika said, ‘the industry is building on deep experience, it has not just sprung out of nowhere.’ Some things should be sustainable, including reducing clinical trial start times and the ramping up of decentralized and virtual trials, which will provide benefit across all of life sciences, not just infectious disease. Also, different players have come into prominence, in a field that, despite being the number one cause of death in developing countries, has attracted little attention: BARDA made a big investment early on into Moderna’s vaccine development.

Even without Covid, it was an incredibly busy year for pharma deal making. Marianne and Monika spoke of how they had made deals across all their portfolio therapeutic areas including oncology, rare diseases, cardiovascular, women’s health, other infectious diseases and more. At Bayer and Pfizer, the emphasis is on ensuring that an acquired company can preserve its culture and have a level of independence so as not to stifle innovation. Francesco has recently launched his much-admired R&D play Centessa, bringing together ten asset-centric biotech companies into one overarching pharma company, providing a new vision for developing medicines for patients.

Biotech companies now have more options than ever before, enabling them to stay independent longer, making the deal space very competitive, with partners needing to offer something more than just capital. The world’s gone from mobilization to a bio-revolution, and BIO-Europe is the perfect place to network to help find your partner of choice.