MP3 Changes the World of Music 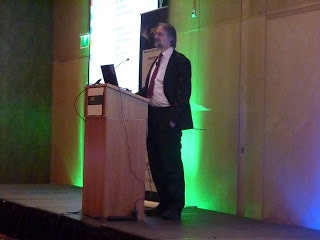 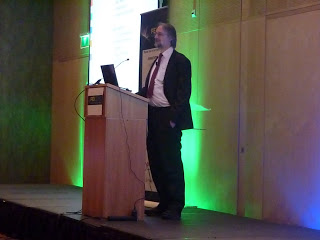 Topic: Inventor's Forum
The MP3 Story: From Basic Research to Changing the World of Music

The MP3 story involves basic research standardization. Internet marketing works. Lessons learned are to try to do the impossible.

Today there is decoding functionality on every PC. There is playback on mobile phones, DVD players, and alarm clocks. Name a device category such as MP3 players. This stands for the move from physical media to the internet economy. It earns money.

Prof Brandenburg took us on a historical journey:

It began with only some dreams in 1982. We should use ISDN to transmit music. There was coding of pictures, video, and speech. However it was not of high quality audio signals. Digital audio broadcasts needed high quality with a low bit rate audio.

Work started at Erlangen University and Frauhofer IIS and other places at the same time. What they wanted was the transmission of music at 1/10th data rate. The basic idea was perceptual coding. The signal sink was to be our ears.

1983: The philosophy is we have CD; so who needs this anyway?

1986: Now they are saying that this will never work well enough for the 'golden ears' in the industry.

Conquering the market means understanding what do with it? They used the internet as a marketing tool due to a lack of funds. They used shareware as a tool to get their coder to people. Everybody should have access to good software. The first plans were to do PC based decoding.

1994: There are nearly no licensees for their technology.

1995: World space decides to use MP3; this is the first CE application.

1995: Ricky Adar wants to start the internet music distribution business, he asks us, 'Do you know that you will destroy the music industry'?

1995: Harald Popp and Dagfinn Bach visit the offices of a major record label in Munich.

1995: First software is running on Windows.

1997: MP3 encoder is stolen and now the technology can be found widely.
Mp3.com starts. This is freeware. This helped because it gave many people the ability to use the technology. This leads to Internet pirates in the music industry.

Summer 1997: Legal actions are taken and are documented in USA Today. This publicity leads to more pirates.

Music is the first to get away from physical media. You must ask yourself why? Innovation is driven by inventions. Inventions are driven by curiosity. Children are curious; we need to stay that way.

The key factors for success are vision, overtime effort, and stubbornness. You also need luck. Ideas from many people helped MP3 to become the best system by its time. There is no single inventor of the MP3. One of the strengths in Europe is the ability to build teams and work together. They set the joint success over the individual. Listen to the market and do not give up.

The age of digital media has just arrived.

Here's a short clip from his presentation below: