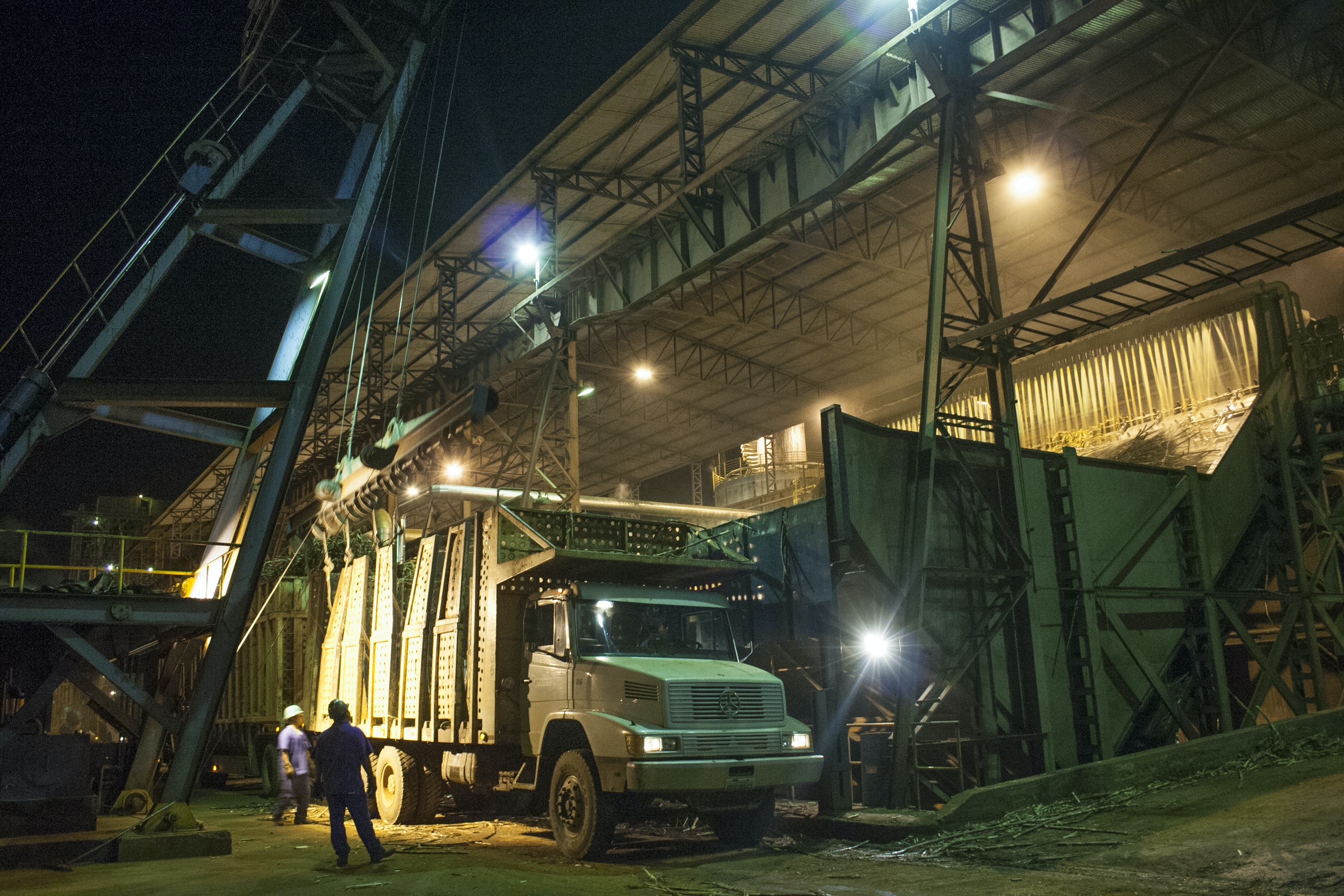 Paulo Corte-Real Neves is Ethanol & Oil Products Trading Director at Raizen, a leading Brazilian sugarcane producer jointly owned by Cosan and Royal Dutch Shell. We sat down with him at the World Ethanol & Biofuels conference to discuss the RenovaBio programme, California’s Low Carbon Fuel Standard and emerging competition with corn ethanol produced in the Brazilian state of Mato Grosso.

“We are going to keep doing our business and keep trying to be more and more efficient to keep up our market share in an environment where we have newcomers close to use. Competition is good. Competition makes us stronger and makes us better in the long run.”

Q: Where do things stand currently with Brazil’s RenovaBio programme?

Paulo Corte-Real Neves: RenovaBio is a great initiative of the Brazilian government. It aims to tackle our energy supply security for the long-term, so it’s a very important mandate for the country to help develop new sources of transport energy up to 2030.

Brazil is a net importer of gasoline and diesel, and our infrastructure for those imports is quite constrained by the Petrobras system. Sp it is a natural decision for us to try to develop and promote more supply of ethanol and biodiesel throughout our countryside.

This industry in Brazil has a long history – almost one hundred years already. Our ethanol is quite competitive with oil on price terms, and it has a very important socio-economic role for our company as it minimises the amount of fuel we need to import.

In terms of the ethanol market, we expect that the CBios – which are the carbon credits generated by the programme – will incentivise additional production coming from sugarcane and corn ethanol during the next ten years.

It should be something that is market balanced. It’s not a subsidy, it’s not something that is supported directly by the government. Instead it will be balanced by supply and demand inside the country. It is natural that there will be a ramp up, so obligations grow slowly in the beginning, and will then grow more and more until reaching 10% GHG savings in 2030.

I wouldn’t expect much of a change in the very first five years of the programme for several reasons. But the main one is the supply and demand balance – what is required of ethanol is basically already available in the country.

After that the aim is to promote additional production to come, and to take a piece of the incremental gasoline supply that we forecast that the market will demand additionally in the country.

Q: Is the US ethanol industry right to say that the persistence of tariffs under the TRQ creates a trade imbalance between the US and Brazil?

Neves: That’s actually a very good question. I can easily understand the reasoning behind what US producers are saying – we are a private company and we like to play in free market conditions, and we strongly believe in that. So we understand very much what is behind a criticism like that.

But on the other hand, if you look at the real figures, the North East and the North of Brazil is a net importer of ethanol. When you look at the figures, you’re going to see that actually in the last couple of years we had record imports from the United States. There has been a ramp up based on the demand growth in that region of the country, and on production basically being stable there.

Yes, one could easily criticise the tariffs. But others can ask if they are really something that changes the market, why is it that we had record imports in Brazil after the tariffs were put in place?

Being in Brazil, the way I see it is that the US is a great producer of ethanol, very competitive in the same way Brazilians are, and there is a market being developed everywhere for both countries. So I expect these imports to keep being placed in Brazil and even grow in the coming years. It’s difficult to say whether it is fair or not, but the numbers are there.

Q: How strong a market is California for Brazilian ethanol producers, and do you expect growth to continue?

A: California is quite an interesting market. They were the first ones in the world to not only look at biofuels or ethanol as a booster to gasoline, but also to look at the GHG emissions perspective. And when it comes to that it’s obvious and very clear to everybody that sugarcane ethanol promotes very strong and important GHG savings compared to gasoline.

Nowadays these should be in the range of 80-90% GHG savings, which is clearly not the same case for other cultures, for example corn, when producing ethanol. Sugarcane is much more efficient at converting sunlight into energy than other cultures.

Naturally then as a consequence we’ve been developing this market, because in order to reach its targets California needs to use more and more ethanol that reduces GHG emissions. The way I see it is that it is something that will stay on trend. I don’t see a big change from what we’ve seen this year – it was a pretty good year compared to previous ones.

There are other elements that may change things, like sugar prices – the sugar world balance can make sugarcane ethanol more or less competitive in terms of pricing. But I would say that it’s fair to imagine that Brazil will keep its share of the Californian market in the coming years. So nothing big compared to what we see this year, but it’s still relevant for us.

Q: As a sugarcane ethanol producer, how does Raizen regard the increase of Brazilian corn production – is it a threat to market share?

Neves: The corn ethanol industry in Brazil is a reality. It’s there, it’s ready to grow, and it will compete with sugarcane – definitely. They are different cultures and they have different strengths. A lot of the advantages of sugarcane have to do with the efficiency of the plant’s conversion of sunlight into transport energy.

On the other hand, on the corn side, there are a lot of efficiencies in terms of land perspective for the corn industry in Brazil, because it’s using the same land that is used for soy. It is grown as a second harvest in the same season, so it’s pretty interesting in that way.

Mato Grosso, where corn is grown, is far away from the demand in Brazil – it’s more than 3000 km away. If we measured this in Europe the distance from Paris would be almost to Russia, so they have a challenge reaching markets for their product.

Having said that, they will naturally feed some parts of the country. Brazil is a big country, and the North is still far away from the centre South where we actually do produce sugarcane. This region will probably will be supplied by Mato Grosso, and there are several other logistics and infrastructure developments that will need to go forward for them to keep growing their production over the years.

But as a Brazilian I’m very happy to see these developments. The country is big and very different socially speaking if you compare the littoral cities to the countryside. It’s definitely something very important to our development as a country, and of course if this comes also with infrastructure and investments in Brazil, then it is a good opportunity as well.

As a sugarcane producer we are happy to compete. We are going to keep doing our business and keep trying to be more and more efficient to keep up our market share in an environment where we have newcomers close to use. Competition is good. Competition makes us stronger and makes us better in the long run, so we are fine with that.

Many other countries are looking to Brazil as a model for successful ethanol expansion. What lessons would you recommend that they take away?

Neves: I truly believe that there is an important lesson to be learned from the Brazilian example. When you look at India and when you look at Thailand, they have big sugarcane industries but mainly focused on sugar and much less on ethanol.

There is clearly an example to be learned and followed, not only because it tends to build a different approach to have an additional product with which to commercialise the sugar content that is produced through the sugarcane, but also because it enables countries to be more resilient in tough times.

As with any commodity, everything is a cycle. When things are good, fine, but the difficulties always come, and it’s easy to see that whenever you have another product which is as big as ethanol in Brazil as an alternative for the producers it makes them stronger than when they don’t have it.

Take the vicious cycle of not having alternatives that you see now in India as an example. IT makes producers suffer more and more, and makes the government put more and more money into subsidies every year. That would not happen if they had the alternative of ethanol.

From this perspective it is clear that the experience that we have in Brazil where we balance things through different products is certainly something that should be seen as an opportunity for development in these countries.

The sugarcane industry is amazing in terms of socio-economic development. I had the opportunity to follow a greenfield development in the interior of Brazil, and it’s quite amazing to see how this changes the city. A thousand families in a completely different position, and everything that comes around the project.

When I think of countries I love like India and Thailand, it really looks like something that should be seen and replicated because it helps the people, and it is for the long-term good of the country. I really well and truly believe in that.

Network with cane growers, sugar millers, ethanol producers, buyers and investors from Brazil and the rest of the world.

Focusing on sugar, ethanol and cassava production, demand and trade in Asia-Pacific
Go to site