We are entering a perfect storm… many illusions will be shattered. 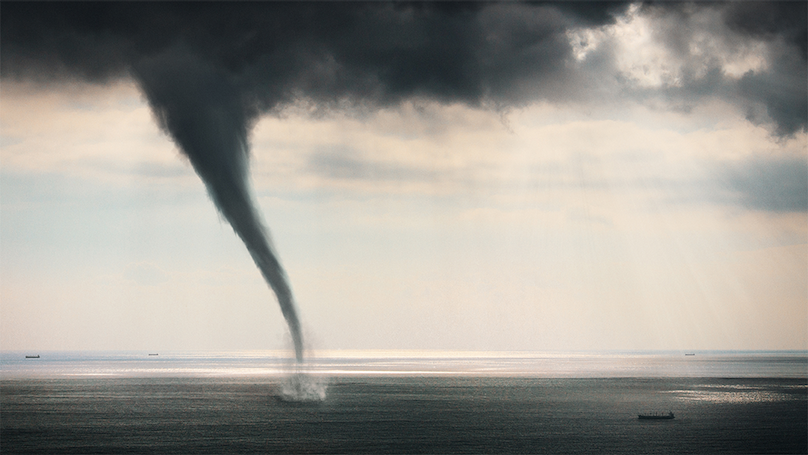 Periodically a system must go into chaos in order to rebuild to a higher state, tearing down the old to build the new. It’s a Universal Law and the basis of every evolutionary process. A rigid structure cannot sustain itself forever. The change is inevitable, whether you fight it or not… it’s up to you how painful you make it on yourself.

It's not a pivot…it’s a tectonic shift.

If you believe we are returning to pre-Covid economics, or that Central Bank pivots will restore economic prosperity, you will likely have difficulty resonating with this paper. We need not ponder for long to ask the question “Is the world around us going mad?” In some way everything around us is changing. The chaos and change we see is all part of an unprecedented paradigm change that is happening. For more insight, refer to my pre-covid Jan 2020 paper titled “Here comes a Big Paradigm Shift”

Risk managers ought to not only consider different perspectives as outlined in the May 2022 paper "Four Principles that can assist risk managers to prepare for future risks" and be aware of underlying fault lines as detailed in the July 2020 paper "Unsustainable Long term trends", to understand how the current paradigm shift develops and manifest, but also need to pay attention to contrarian views. Contrarian voices often spot the danger well in advance, but they are often dismissed for many reasons including cognitive dissonance.

The world is entering very stormy waters, many mistake this for yet another cycle and are not prepared for the tectonic shifts that are happening. Many illusions exist that makes it difficult for people to recognise that an old rigid system is crumbling, this paper provides some insight to these dynamics.

The time series of data often used in modern day risk measurement do not reflect perfect storm conditions, and no person alive has first-hand experience either. Looking back in history we find two distinct periods with many similarities to 2022, where the conditions were fertile for the formation of a perfect storm. Currently, the only ingredient missing is a debt/credit crisis, which is fast developing, and will inevitably lead to a perfect storm. 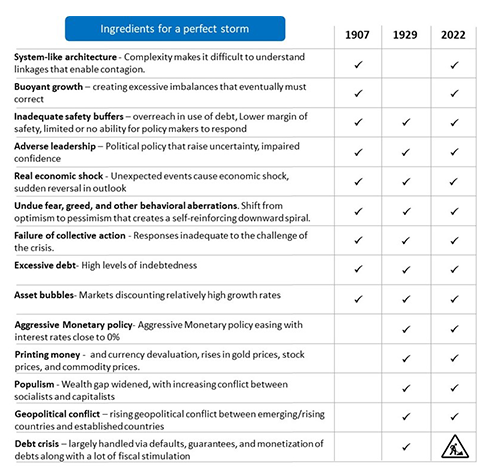 Many illusions to deal with

Lack of experience, dogmas, peer pressure, fear, cognitive dissonance and ignorance, to name a few, are all factors that prevent people from seeing illusions for what they are. There is an attitude in many circles currently of “if we don’t talk about it” or “if we don’t give it energy”, “it does not exist or will not manifest”. This attitude will only result in a worse outcome and make the transition to the new paradigm more painful. Risk managers and business leaders who wish to be ahead of the curve will need to understand the key illusions that needs to be dealt with, some of which are outlined below.

Central Banks are part of the problem

Excessive monetary stimulus over more than a decade has laid the foundation for significant imbalances and significant systemic risk. Excessive money printing has not led to crippling inflation until recently, as the easy money found its way mostly into assets and bonds, creating huge bubbles, rather than flowing into the economy creating headline inflation. This created the flawed narrative that Modern Monetary Theory (MMT) is the new secret sauce. Even though recent sharp increases in inflation are mostly because of supply chain shocks, it is also a case of money printing catching up. Central banks are cornered, raising rates will prick the asset bubbles and crash the economy, whilst leaving inflation unchecked will result in a collapse in disposable income, which will also eventually crash the economy.

Both pathways will result in a significant amount of pain and several casualties. The big elephant in the room is the astronomical amount of debt, creating a low-level ceiling for rate hikes, Central banks have lost the inflation battle before it was started.

A cyclical reduction in headline inflation will be a false mirage, as it is merely a reflection of a crashing economy with demand dropping through the floor, rather than successful inflation targeting. Fiscal stimulus that will follow will be more fuel on the fire, resulting in renewed increases in inflation when economic activity picks up again.

The similarities with the 1929 period are startling, central banks are behind the curve, and we are witnessing historical policy errors. The velocity of rate hikes into a recession is unprecedented, this will not only create a very severe economic contraction, but also creates the possibility for a depression, like the 1930’s.

A debt crisis of epic proportions is inevitable

Bankruptcy tends to happen slowly and then suddenly. We are now entering the “suddenly” phase, as a toxic cocktail of inflation, rapidly rising interest rates, supply chain shocks and energy shortages, not only triggers a consumer credit crisis, but will also manifest a corporate and sovereign credit crisis. Debt has been at record levels that are not sustainable. We are way past 12 O’clock with the debt party, it is no longer a question of if, but rather when we will see the debt/credit crisis of the century. Early 2023 will likely be very turbulent.

Most Assets are on shaky ground

Asset values are in bubble territory unlike anything seen before, by orders of magnitude. The Wilshire 5000 total market cap index/ GDP (The famous Buffet indicators), the FINRA Margin debt and S&P real values chart, and PE Shiller ratio are just a few of many key risk indicators screaming red at all-time highs.

Most assets fall into one, or a combination of three categories:

None of these categories perform particularly well during periods of great financial distress. There is significant downside risk to assets valuations as the perfect storm intensifies, and we will likely see a protracted period of pain.

Moral Hazard has been violated too many times

In reality, there is no such a thing as Government funded, it is all taxpayer funded. Governments are spending, borrowing and bailing out as if there is no tomorrow. Furthermore, risk takers have been bailed out so many times by Central Bank policy intervention, that we are left with a whole generation who do not understand the consequences of the irresponsible actions.

Moral hazard has been violated too many times and most safety buffers have been exhausted, when the next financial crisis hits, governments and central banks will likely have very little ability to continue their bailout binge, many will experience a rude awakening when this happens.

Risk models are flawed when it comes to paradigm shifts

Risk models and risk managers have been trained and conditioned on data and experiences that do not reflect significant paradigm shifts. Same way risk, significant breakdown in correlations, stagflation, war, large-scale mortality, sovereign defaults and bank failures without bailouts, to name a few, are not well catered for in risk models. It would be wise to apply a healthy dose of scepticism when using the outputs of quantitative risk models.

The rise in conflict has been building for quite some time, when there are less bones available for dogs, they fight, sadly human behaviour is not very different. War has always been an attractive distraction for politicians, it won’t be different this time. We have reached a point where many things are being weaponised and escalation occurs frequently, it won’t take much for a miscalculation or deliberate action to spill over into broader kinetic conflict. Social unrest will also grow with several negative feedback loops.

Health crisis is far from over

Excess death rates continue to increase and there is growing evidence that people’s immune systems have been compromised. Long winters combined with poor nutrition due to food shortages, as well as heating and energy shortages, will put significant strain on the wellness of millions of people, further aggravating health challenges.

Climate change is real, so is weather modification weapons

Climate change is real, but perhaps more controversially, so is weather modification weapons. Attribution is very difficult, and most people don’t believe such technology exist, making it very attractive to use during periods of geopolitical conflict. Expect more extreme weather as global conflict grows.

It is not possible to deal with all the illusions in such a short paper, for example, the demise of current Fiat currency systems, Political structure failure, Crypto currencies and Information Warfare are topics that merit detailed introspection on their own. This paper merely attempts to create broader awareness and assist risk managers to awaken their minds to the fact that the world they live in will transform to something very different than what have been used to. To navigate the chaos during the transition phase of this paradigm shift, an open mind and a multidimensional understanding of the prevailing illusions are required. Not everyone will survive the chaos, but those who are well prepared and flexible enough to navigate the storm, will thrive when the new system starts to form.

Jaco is an independent risk management and strategy expert, who provides strategic risk advisory services. He has 25 years risk management experience, and is the former Chief Risk Officer (CRO) for a large South African Banking Group.