The future of AI in healthcare…and pharma 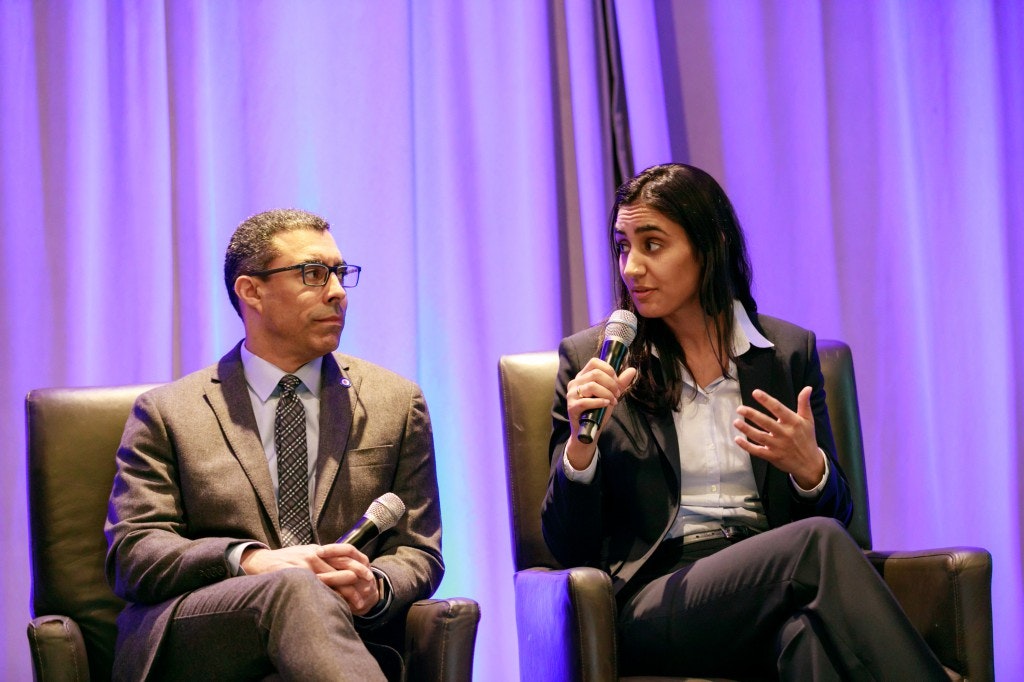 “Artificial intelligence (AI) will disrupt healthcare more than any other industry,” predicts Alex Zhavoronkov, CEO, Insilico Medicine, speaking at the 2019 Digital Medicine & Medtech Showcase, in San Francisco in January. The panel representing Alliance for Artificial Intelligence in Healthcare (AAIH) members highlighted what is possible, what is standing in the way and what is science fiction.

Pharmaceutical and biotech companies are using AI for deeper insights into biology and disease states as well as patient stratification, payers are using it to evaluate therapeutic efficacies of various drugs and the FDA is evaluating AI applications to speed the regulatory process. “It’s not just a hype cycle, but a creditable advance,” Zhavoronkov says.

[To learn about the furture of digital medicine, read about our new report, Securing Against Cyber Threats]

AI is early enough in its life cycle that it still means different things to different people. At its core, “AI is about machines performing the same tasks humans perform now,” Ben Newton, CDO, GE Healthcare Life Sciences, says. Machine learning, which is often referred to in the same breath, is one step further along. With machine learning, “algorithms are used to find patterns and make predictions in the lab or in patient populations,” Brandon Allgood, CTO and co-founder, Numerate, elaborates.

“For the foreseeable future, humans need to be involved so the algorithms aren’t operating in a vacuum,” Allgood says. “They’re meant to be wielded against particular problems or data sets,” Bill Martin, president and COO, BlackThorn Therapeutics, adds.

AI’s immediate benefits are in increasing efficiency and making better decisions. “AI analyzes data in ways (and quantities) that humans can’t,” John Baldoni, SVP, In-Silico Drug Discovery, GSK, points out. The quick wins for pharma will be in product supply and clinical operations, panelists predict—for example, using AI for quality control in manufacturing, or to expand labels based on retrospective data, without needing additional clinical trials.
It’s having immediate results in healthcare. For example, Baldoni spent time with a major US healthcare system (with 10 million patients) learning how it used AI, and its results. “They looked at their physicians’ daily diagnoses and prescriptions. Based on that data, they determine whether individual physicians’ diagnoses were right. When a doctor errs, they contact him and discuss their results. The system estimates it has saved 26 lives using this method.”

For pharma, as AI becomes more common and results gain validation, AI will be used regularly to find unknown features that drive disease. One of the opportunities is to develop new, data-led hypotheses. “We know what we know,” Newton says, which contributes to bias in hypotheses. AI, however, can look for completely new and, to our minds, unrelated patterns within outcomes and thus develop new hypotheses. Ultimately, this will allow the redefinition of “low-hanging fruit.”

AI’s potential seems to significantly outweigh its downsides. Its capability to quickly analyze and find patterns in massive quantities of often disparate data will spur greater understanding in diagnostics and biology, including how to modulate biology, how therapeutics behave in the clinic versus in trials, and insights in clinical outcomes that enable patient stratification. AI also has implications for the commercial environment. “I look at AI in terms of how those elements related to each other,” Baldoni says.

Oncology, because of the massive data generated there, will benefit early, Maria Luisa Pineda, CEO and co-founder, Envisagenic, predicts. But all disease categories will benefit. For example, Allgood says, the low-hanging fruit has been picked for cardiovascular disease and neurodegenerative diseases, yet a large need for therapies remains.

Drilling down, Allgood suggests AI could help determine which inclusion criteria could be used for clinical trials by determining which features are most important in terms of the efficacy of a product or mechanism. “In the future, it could be used for retrospective trials for patient selection.” AI already is being used for rescue studies—failed Phase III trials in which there are indications of efficacy in some patients—so that the earlier trials are studied and expanded upon.” Others are using AI to repurpose molecules, to find other promising applications.

“That’s the beauty of data science,” Allgood says. “As long as you have feature and outcomes, you can explore the points related to efficacy or the lack thereof.” This retrospective learning can be applied prospectively, whether in clinical trials or in manufacturing optimization.

The pharmaceutical industry, collectively, has one of the largest databases in the world regarding how molecules interact with biology. It details failures as well as successes. But, Baldoni says, “the failure data resides in the companies. If they would release their failure data, curate it and annotate it, that data could benefit everybody.” He calls this “throwing dirt under the tree to reach the higher fruit.”

He formed a precompetitive consortium to do that, working with Lawrence Livermore National Laboratory, the National Cancer Institute and other notable labs. The result is 150 curated data sets on preclinical toxicology that are being used now to test hypotheses. This month, he will begin a multi-parameter optimization for pharmacokinetics and safety with 104 different features. “We’ve done this on a small set and have demonstrated that we can create molecules from the training set that are very different.”

For any of these projects to be realized, the data must first be there. “But, we need the technology and the algorithms to ask the right questions, and the right people to understand what that means. AI platforms don’t fit in just one bucket—biomarkers, or patient stratification, for example,” Pineda says. Instead, AI can work across silos and at many stages of clinical development simultaneously. For example, stroke and heart failure have just a few biomarkers listed in medical texts, but with AI, we can gain deeper understanding of the biomarkers that lead to stroke.” And, answers can be generated faster.

Several years ago MD Anderson Cancer Center partnered with Watson to analyze cancer data. The program failed, but the lessons learned resonate today. Namely, Allgood says, “lead with the technology, not the sales.”

Beyond that, Angeli Moeller, co-lead of AI, head of research IT business partnering, Bayer, says, “Set strong milestones, understand the science and be willing to terminate the investment. You need a tech team on your side as well as on the vendor side to understand what you’re being sold.” And, Newton adds, “have solid validation.”

AI has tremendous potential to revolutionize the pharmaceutical and healthcare industries. But before deploying it, companies need to understand exactly what they expect and what AI realistically can deliver, now and in the future.